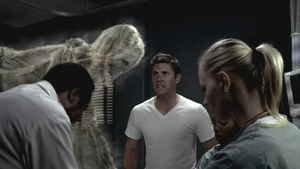 Apparition is a term describing the manifestation of Spirits into the physical world. When manifesting, Spirits can make their presence known in several manners. The power and skill of these apparitions are dependent on the Spirit in question.

When manifesting in the physical world, Spirits can choose whether or not to reveal their presence to those around them. Additionally, they can sometimes alter their appearance in these cases. Spirits typically manifest identical to the way they looked when they died, though they can alter their appearance and even appear as orbs or shadows.

Average humans can typically not see Spirits unless they specifically make themselves known. Various supernatural beings possess a higher awareness of Spirits and pick up their presence more quickly. Psychics possessing the ability of Mediumship are generally able to detect Spirits even if they do not wish to be known.

Spirits are intangible and thus cannot interact with the physical world around them. However, they can manipulate their surroundings with their minds. Spirits can move through solid objects such as floors and walls if they desire and can appear and disappear whenever and wherever they desire through teleportation.

More powerful Spirits can alter the perceptions of those around them, making people see and hear what they desire. Evil spirits often use this to torment those they haunt, while good spirits can use it to send messages.