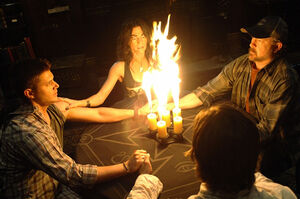 A Seance is a ritual that can be used to invoke or summon the presence of Spirits to a certain location. Seances can be performed by certain Psychics or others. It is typically used to communicate with the other side.

A Seance can be used to force Spirits to reveal their presence, though this ritual may also prove to be quite dangerous, as it can draw unwanted spirits or greatly anger the summoned spirit, causing it to become violent.