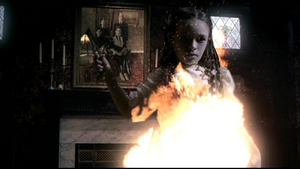 Spirits, more commonly referred to as Ghosts, are the non-corporeal manifestations of the spirit or souls of the deceased. These spirits typically reside in a dimension known as The Other Side, but can manifest in the physical world.

Gentle Spirits, also referred to as peaceful or good spirits, are spirits who remain on the physical plane with good intentions. These spirits will often seek to protect their loved ones or offer guidance to those who need it. These spirits often do not manifest unless there is a reason or when they are summoned.

Vengeful Spirits, also referred to as evil spirits or poltergeists, are spirits who remain on the physical plane for malicious reasons or anger. These spirits are often frustrated over their death and are consumed by pain or anger, which will corrupt them. These spirits will often take their frustration out on any who come on their path.

However, some spirits remain on the physical plane out of fear of moving on or not wanting to let go. These spirits are at risk of becoming vengeful spirits, as they may grow to become frustrated or bitter over time. It is also possible for spirits to be unaware of their deaths. These spirits will be stuck in a time loop and will either relive their final moments or forced to relive their deaths over and over.

Spirits are not tied to the physical world and may only appear in a non-corporeal form, meaning they cannot physically interact with the world. The form in which spirits appear is dependent on the individual in question and their intentions. They each share the same powers and abilities, though the power and skill of spirits is determined by the strength of their emotions and their time in the physical world.

Spiritual Weaknesses
Iron: When a Spirit makes contact with pure iron, their apparition will be forced to temporarily disperse.
Salt: Salt has a purifying and cleansing effect, and thus can be used to repel from a location or disperse their apparition.
Exorcism: Spirits can be temporarily or permanently driven from the physical world through the use of an exorcism, though the result is dependent on the ritual in question.