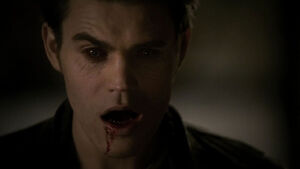 Vampires are a breed of supernatural undead beings. Known as creatures of the night, Vampires are immortal beings that feed on the blood of the living.

The process of turning a human into a Vampire is called siring. The Vampire whose blood the human consumed to begin the transition is called a sire. This process creates a powerful and complex bond between the creator and the created Vampire, although how this bond develops is dependent on the two individuals in question.

Newborn Vampires may develop a parental or familial bond with their sire, viewing their sire as a parent or sibling. However, a sire bond between Vampires may also be sexual in nature when there was already an attraction to begin with. If there was animosity between the sire and sired or the change was forced, the bond may be one of rivalry or true anger and hate.

Vampires are individual beings that do not participate in a structured society. Each Vampire chooses their own path and most are driven by their own desires. Vampires are predators by nature and will often be driven by their taste for blood. However, as individuals, the personality of Vampires is based on who they were as humans. For this reason, some Vampires seek to blend into human society while others believe themselves above them, viewing humans as little more than a source of food.

Although Vampires do not live in a structured society, they are still bound by certain rules that have been in place for centuries. One of these rules is to never expose the existence of Vampires to the world. Another rule is to never sire a child, as these immortal children will never age and will eventually be driven insane and become uncontrollable.

Vampires have no true hierarchy, however, the status and power of Vampires is determined by their age. Vampires grow more powerful the longer they are undead. For this this reason, younger Vampires will often be cautious of older Vampires and will treat them with respect. Sometimes younger Vampires seek the leadership and guidance of older Vampires, especially when they have only just been converted.

Vampires are undead immortals and such such, do not require sustenance like the living. Instead, they are dependent on the blood of the living in order to sustain themselves. Vampires can survive on both human blood and animal blood, though the consumption of animal blood will not sustain them for long and feeding solely on animal blood will eventually weaken the Vampire.

Vampires appear indistinguishable from regular humans, although their body temperature is considerably lower. Although they do not require air, Vampires breathe in a shallow manner as a reflex because their subconscious still believes they require oxygen. Vampires have a weak heartbeat, as the heart still pumps blood through their bodies to keep it mobile, though their other organs have become dormant.

When triggered by hunger or experiencing extreme emotions such as anger, Vampires grow sharp fangs that can easily shred through skin. In this state, blood rushes to their eyes, turning the eyes and the veins around the eyes dark red.

Blood of Vampires contain properties that allow Vampires to quickly regenerate from bodily harm, allowing them to heal from seemingly fatal injuries within hours or even moments. When the living ingest their blood, it passes on this regenerative factor and allows them to recover from otherwise potentially fatal injuries.

Weaknesses
Sunlight: Vampires are vulnerable to sunlight, especially ultraviolet sunlight, to the point where direct exposure will cause their skin to burn and catch fire.
Fire: Vampires are vulnerable to fire, which can destroy them by reducing them to ashes.
Stakes: Wooden stakes are fatal to Vampires if they are stabbed in the heart.
Magic: As undead and unnatural beings, Vampires are weak to magic.
Decapitation: Vampires can be killed through decapitation.
Heart Extraction: Vampires can be killed if their hearts are ripped from their bodies.
Desiccation: Vampires are dependent on the blood of living for sustenance. If they are unable to feed on blood, their bodies will weaken and dehydrate, essentially turning them into mummified corpses unable to move.
Vervain: A herb containing magical properties. It is poisonous to vampires and protects their victims from compulsion once ingested.

Limitations
Invitation: Vampires are unable to enter the residences of living beings without a formal invitation of the legal owner of the residence.