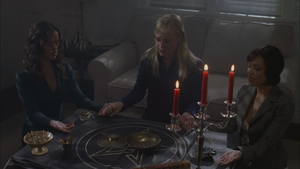 Witches and Warlocks are humans born with the natural ability to channel the energy of the earth and its natural forces, also referred to as magic. The act of performing magic is referred to as witchcraft.

Witches and warlocks have existed since the dawn of humanity. They are humans born with the extraordinary ability to feel and channel the magical energy that surrounds them. In ancient times, these users of magic were seen as leaders and healers, sometimes even worshipped by cults as gods. However, as the ages past and humanity evolved, magic eventually became feared and those practicing it were persecuted. In modern times, magic has been almost forgotten by humanity viewed as fantasy by most.

The ability to perform magic is hereditary, meaning that only those with the blood of witches and warlocks are able to practice it.

Natural magic, also referred to as white magic, is a pure form of magic which draws from nature itself, as well as the inner strength of witches. Although powerful, this form of magic is limited by several rules, as this magic cannot go against the natural order of things.

Dark magic, also referred to as black magic, is a form of magic that goes against the natural order. A prime of example of black magic is necromancy, the manipulation of the dead.

Covens can be structur

Witches and warlocks may use magic to extend their lifespan, but are ultimately mortal and will succumb to aging and death. Through the use of magic, they are able to maintain a youthful appearance long past their prime. 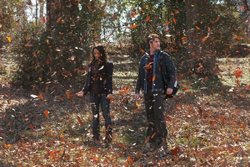 Physical Abilities
Longevity: The ability to extend one's lifespan to beyond human capability.

Mental Weaknesses
Fear: In order to channel magic, witches and warlocks need to be in control of their emotions. When experiencing fear to a certain extend, Witches and Warlocks may become unable to perform magic, leaving them powerless.